Over the past couple of centuries, “generic” Christianity has been a pretty comfortable endeavor in the United States. After all, those who founded this country were strongly influenced by principles and concepts that are generally associated with Christianity. Religious people have historically been held in some respect in our nation. American culture has long been infused with Judeo-Christian ethics and values – honesty, integrity, benevolence, justice, sexual morality, etc. The average person was expected to manifest such qualities, so those who embraced the gospel of Christ were not so very distinct from those who did not. That is not to say that there has been no ungodliness or hypocrisy or shame in our background, but there has consistently been a powerful element of religious influence and thus followers of Jesus have probably spent more time and effort distinguishing ourselves from perversions of Christianity than we have distinguishing ourselves from the world around us.

However, while we weren’t looking – or at least not looking too closely – things changed. Dishonesty and corruption are rampant in business, government, community, education. Divorce and co-habitation (once deemed shameful) are commonplace, and hyphenated relationships are dissolving the natural affections of kinship which counteract problems like neglect, sexual abuse, and domestic violence. Sexual promiscuity and pornography have promoted open homosexuality and transgenderism. Materialism encourages sloth, entitlement, greed. Scientific advancement and technology are hailed as humanistic evidence against religious superstition and ignorance. Entertainment and recreation are becoming the end all, be all of daily life and our cultural heroes are known more for their athletic or acting prowess than for their character or wisdom. Mass media appears to promote an agenda of moral liberalism and we are increasingly glued to our phones, tablets, and computer screens, addicted to the drug of text messaging and “look at me” social media. Stir in the perversion and dilution of true Christianity in this nation, as religious leaders have pandered to numbers, money and entertainment, thus producing legions of nominal Christians who have very little conviction and even less understanding of God’s Word. Wash it all down with alcohol, legalized pot or the prescription drug of choice and there you have it. And don’t dare criticize anyone or suggest that their behavior is unacceptable, offensive, or sinful. Toleration is the mantra of the day.

It seems to me that folks who are serious about their discipleship are nervous – even afraid – about the future of our country. Perhaps, however, we shouldn’t be so shocked about what’s transpiring. After all, mankind has proven historically that we tend toward moral entropy. We are good at giving in to our desires. Godliness is demanding of some discipline, whereas ungodliness demands little of us. It’s easy, lazy, momentarily gratifying. And Satan is very very good at pushing those “lust” buttons. There’s a reason that Jesus refers to him as “the ruler of this world” (John 12.31; 14.30; 16.11). If history repeats itself, then we should have seen this coming. Thus, real disciples likely have some reason for concern. I don’t know what’s coming next. I don’t know how the recent election will impact our lives as Christians, but it is a bit alarming that we are so concerned for “making America great again” that Christians have supported en masse men that we would have never supported twenty years ago. I don’t know what will happen with upcoming supreme court nominations, nor with international relations, nor 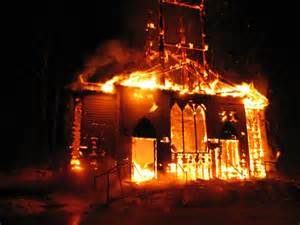 with such moral issues as abortion, “gay rights”, or the legalization of marijuana. Will free speech and religious liberty continue to be guaranteed rights, or will the average sermon on sexual immorality, dishonesty, or greed be construed as “hate speech”? Nor can I predict what will come in the next years or decades as my children try to serve the Lord amidst increasing ungodliness. I have some real concern for them and for their children. But then, literally thousands upon thousands of people have served the Lord in far more oppressive circumstances than they are likely to face. I really do hope that they embrace the promise of eternal glory in such measure that they maintain their faith. Indeed, some fear for the future is justified. But I wonder….are we fearful that we won’t be able to serve the Lord, or that we won’t be able to serve Him comfortably? We’ve had it easy our whole life. Is that what we’re really worried about?

Perhaps this open moral shift in American society should prompt real disciples of Jesus to rethink some of our concepts and understandings. We are gravely concerned for the future of our nation – understandably so. Yet this is probably a pretty good time to be reminded about the government that should be the object of our focus: the kingdom of God.

I would propose that most Christians in this country tend to think of our service to God in terms of “church” membership. The establishment and definition of various religious organizations throughout history has essentially dominated our concepts about serving God. We often tend to identify ourselves more by affiliation with a particular religious group than with our Lord. That has certainly been true of denominationalism (hence the descriptive name), and in reaction to such, of those who have tried to avoid denominationalism. In practical terms, religious people see ourselves as a “member of the church” rather than a disciple of Jesus Christ. Oh, sure, reading this we think, “Wait a minute!  I do follow Jesus!” But unless this point is made, I think our default setting is church membership. I do not want in any way to undermine the import of saved people (the “church”). After all, it is this group of people that God points to in proof of His “manifold wisdom” (Eph. 3.10), and clearly we have relationships and obligations that are connected to our place among other Christians in the body of Christ (Rom. 12; 1 Cor. 12-14; Eph. 4.11f). But there is a much grander concept in the Bible that impacts our service to God, and that real Christians in America (and in every other nation) need to embrace now. We are not Americans who happen to be Christians. We are citizens of the kingdom of God, subjects of Christ our King, who happen to be living in the United States.

The resounding promise of OT prophecy is that God would one day set up an eternal kingdom with His King upon the throne and that this King would reign over all creation (Dan. 2.44; 7.13-14; Ps. 2; Ps. 110; etc.). Jesus preached the good news of this kingdom (Mt. 4.23f; 9.35f); claimed His position as King (Jn. 18.33-37); died to save any who would accept His rule; was raised in victory over His enemies (1 Cor. 15.19f; Heb. 2.14-15); and ascended to sit at God’s right hand and exercise His rule (Mt. 28.18f; Acts 2.32f). The subject of His teaching on the earth and that of His apostles was not merely the creation of a group of saved people, but the fulfillment of a promised government – God’s kingdom with God’s King upon the throne. Does that undermine the import of the church – God’s people? Of course not. But it does underscore that there is something much bigger and more powerful than God’s people at work here. We are those who have accepted Christ’s rule and given ourselves to His service. His blood has redeemed us so that we might be qualified to live forever in His presence as the citizens of His kingdom. But the great promise of redemption is to be realized in the fact that Jesus of Nazareth is God’s King, sitting upon an eternal throne, ruling a government that will never be destroyed and which transcends the limitations of this temporal existence. Which means that, no matter what happens in America or any other nation, God rules. And God rules victoriously. Thus our loyalty, passion, and focus needs to be on the promotion of and service to that kingdom (Mt. 6.33). We are resident aliens – strangers and pilgrims – not only on this earth but in this nation (1 Pet. 2.9f; Heb. 11.13). The hope of the ages is not to be found in a return of America to her “religious” roots. It would be nice to see, and certainly more comfortable for Christians. Instead, the hope of the ages sits upon His throne right now, calling for His people to maintain their trust in His rule, until He brings this world to a conclusion and transforms His people into our eternal bodies, suited for everlasting association with our King and our God. Maybe now is a good time to realize just who we are, and Whose we are. We are much more than religious Americans and members of Christ’s church. We stand as God’s people before the eternal throne of our omniscient and omnipotent King. What have we to fear?